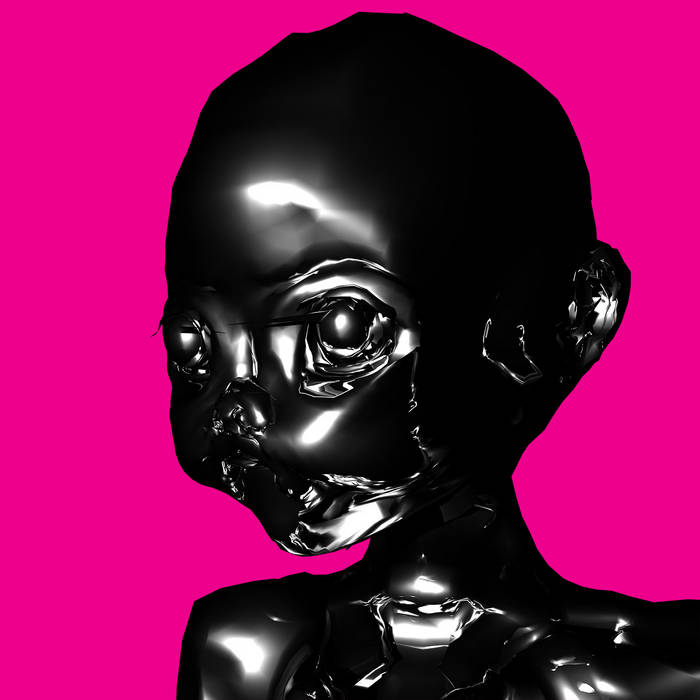 Logan Penny one of those records that changes the way you think about music Favorite track: hal0.

1983 make me listen high up on my bleeding toes - down by the well, saving your soul - these people know how to build from the ears down, pay attention - purgatory4u = beautiful Favorite track: internet god.

For those of us that grew up Christian then turned "non-believer," the iconography, language, and belief systems of that religion remain buried in our being. FLANCH comes from this secular place that sits upon a well of Christian ideals and vocabulary. FLANCH wants to pump all this sacred residue to the surface and put it in conversation with hedonistic life and love, the internet, and internet love. This conversation, at times, deals in violent oppositions between the secular and sacred, at others, this conversation synthesizes.

Musically, this occurs in no vacuum. The track "graace" builds tension with the trap trope of rising and falling mechanical synth arpeggios. While an ear familiar with trap would anticipate a certain kind of drop now rote in the genre, "graace" breaks this tense moment with a rolling deep rhythm that is forceful and yet feels like soaring on some hedonistic cloud nine. The lyrics here are representative of the premise of FLANCH. Ending this moment is the line, "sipping the love of God with the hottest goddess and angels" rapped by a genderless, vocoded voice. Hedonistic love and the most pure action--taking part in God's love--come together fluidly, and amidst the sensuous yet forceful beat, it is completely acceptable. The voice turns frantic after this, spitting the line, "I have Jesus, but I have to please her," amidst a rigid beat with scattered spacey noise closing in around the edges of the song. The weight of personal Christian history and desires we try to submit freely to in exertion of our freedom send us spinning.

FLANCH does not exclusively dwell in the hip-hop or trap world, but at times utilizes the oily musical language of Arca--producer and avant-garde electronic musician. Where Arca sculpts synth sounds to express the fluidity of the body, FLANCH forces our spiritual selves to be confronted with fluidity. Melodies and rhythms speed up and slow down in electronic swells, unafraid to decompose and even destroy themselves on an orchestral scale. These moments mirror the thinning and thickening of a spirituality mucking around in the mind and body of a lapsed believer. At times, after being thrown around in this world of hedonism and religiosity FLANCH has created, the listener is thrown into a nebulous interim expressed in rhythmically amorphous spacey instrumental tracks.

If you once believed and sometimes feel vacuous, swimming inside some ghostly religiosity and don't know how the hell you ended up like this, FLANCH is singing for all of you kindred spirits. For the rest of you, just know FLANCH is putting out some hot tracks.

Track Name: graace
Your name, poured out, my mouth, no shame,
no voice, I’ll rejoice, by my choice; no pain - just
oil paint, all anointed, all appointed in gold frames,
so tame like cocaine over propane with a low flame...
heading down to heaven - I gotta find a new halo,
nothing but bawdy hotties with bodies - gardens and candles, wrought the naughtiest angles, bought a cot and entangled sipping the love of God with the hottest goddess and angles,
just pass the piece - I wanna have a piece of all the masterpieces that the master feeds us,
I have Jesus, but I have to please her,
so to have releases from the mad decreases,
I’m tongue tied until my sun rise but then the
sun is setting on this son’s set, and I’m betting (that) no time is gonna pass now until I
pass out into a numb depression,
(numb depression, numb depression)
(this is) confession of the soul’s election of an old affection; no discretion
and no protection, just hold your breath in and hope for death before the soul’s possession, it’s known oppression, transgression is man’s lesson since adolescence, but
we aren’t sapiens, we have sapience without salience - mental aliens,
(by choice, no pain)
[But wait, recalculate, let me retain my thoughts]
This is my fable: in my cradle - the navel of Mother Abeloth,
vows spoken over wine-stained tablecloths,
milking what was made as my anger blazes the chamber walls,
labeled me for death like I’m Cain the day he knocked Abel off, so
stay long but you will never go to my weathered soul, cause you’ll face the dark, tapered off by an edible, incredible, complacent heart that really
plays the part, but the maze is ours, we’re animals with mated parts - just gaze upon our indelible, identical, jaded marks...
Were the whole realm of nature mine That were a present far too small Love so amazing, so divine Demands my soul, my life, my...
Track Name: ble$$ings
I have a torso shaped like a heart and, I have daisy for a tongue,
Love me day and night and take my torso
Love me day and night and take my tongue
Murderous, merciless, emotional surfaces,
all is all but pervious,
her, the center of this verse, tell that to Copernicus -
this nervousness, coupled with a cup of worthlessness, doubled up enough to further us, hoping for a sum of
purpose just so to work this bluff and keep hoping that I will deserve a touch of this perfectness that is hurting us,
chambered in her that conceived me,
thinking of how she completes me,
no mistaking through all of the weak knees - I been taken from all of the godsends,
and debating with all of the watching of the watchmen, teeth like a flock of the
sheep coming back from the washing,
auction all of my dreams, cause all of it seems to fall into place with audible bangs and scrapes that cut my face
virgins without number, wonder
why the cluster of vines, and scent of the lime keep falling behind the center of time
The mandrake giving off fragrances, flavoring the flagrance of this ancient, but complacent bliss...
don’t know how much I can take of this...
Blessings, written on top of the
towers of all the confessions from our
lessons, wilderness follows the
hours, I fall to possession by this
weapon of caressing, baptism in the pools of Heshbon, as I’m painted with love, it’s raining above,
and your head is held up by the left hand of our love...
Love me day and night and take my torso
Love me day and night and take my tongue
Track Name: purgatory4u
My symbol of comfort
hangs over me like a halo
My semblance of solace
looms over me like a rainbow, Your lips are like a scarlet thread, You’re a god-relieves anxiety
You taken my heart
I wanna share the skin
that hangs around your neck and behind your face
a golden bracelet
that tastes like a wine
my nauseous longing-
I wanna share the rose
that hangs between your breasts and under your tongue
is my Jerusalem of milk and honey
Track Name: hal0
I’m not afraid of mystery
or fingers dripping with myrrh but I know that taller demons just learned my name.
I know that you are here and I know that you will guide me I’m not afraid cause I know
I feel you here inside me
I’m safe in your salvation
till I leave my earthly body
I’ll give you my eternal soul
cause I know that
you are more than I have ever know
Come into my mortal spirit
come deeper into my eternal soul inhabit my temple
be one with...(my body)
Track Name: tender
i met you online
and i like yr pictures
but i don’t know if ur a real person dont play with my heart anymore
unlike you, im very fragile
i dont want to meet you anymore:/

Bandcamp Daily  your guide to the world of Bandcamp